Dota’s Magic is a Complex Beast

Dota is a game about escalation. Just about every mechanic is build to lead to a make-or-break point.

Sure, as scrubs we are personally used to having junglers who afk-farm until the 30 minute mark in the team, 5-hero stand-offs at the midlane, we struggle with last-hitting ourselves, having the proper map awareness or checking what items are on that hero we are trying to gank. As a player, mastering the basic mechanics of the game is something to constantly need to try to refine and practice and get down so it becomes second nature. But behind all of that is the steady increase in resources that each side receives, how come-back mechanics and vision impact the game when trying to break high ground, how overpowered skill and item combinations can get. For me, and I assume a majority of people playing Dota, most of the time it feels more like the game is playing you, not the other way around.

The fascination then is, when we watch pro-level play how these teams understand, play and manipulate these dynamics and compete with each other in this. But if you watch the game casually, even with a basic understanding of what all the heroes and items and mechanics individually do, it can be very hard to make sense of how and why a professional match can swing the other direction suddenly or why with an even kill score one team may be way in the lead. All the amazing talent commentating games helps us plebs get this with providing insights like “this team is on a timer, they need to close out the game in the next 10-15 minutes”.

Yet, it can still be hard to grasp what impact a 3-on-3 fight at top lane may have… yes, we watch the spectacle, the spells go off, may even recognize the incredible coordination in execution between the player, the jukes and the like. But how important was the outcome of this? Why may the ostensibly losing side of the fight be perfectly fine because they have their carry free farming the rest of the map in the meantime?

This is incredibly hard to see and understand if one focuses on the action on screen without seeing the lasting effect of what happened. The general Dota 2 UI certainly only helps little, the fight-recap is convoluted, when a late game teamfight breaks out you don’t know who has enough gold to buy back into it before death without having been clicking around heroes and mouse-hovering over their gold. It all just seems like chaos if you are not used to playing the game on a some-what team orientated level yourself. Or are fortunate enough to have a great analyst caster giving you the necessary insight in time.

Yet, still this puts the viewer into a very passive spot, hindering their engagement. This is precisely where we want Dota Live Analytics to shine, to enable the viewer to access the ramifications inherent in the complex background dynamics. And not in hindsight, by being fed “x over y”-stats, but on the point when the incredible plays happen that we come to watch Dota for in the first place.

Take the recent MLG finale in New Orleans between Evil Geniuses and Team Secret, Game 3, as an example. 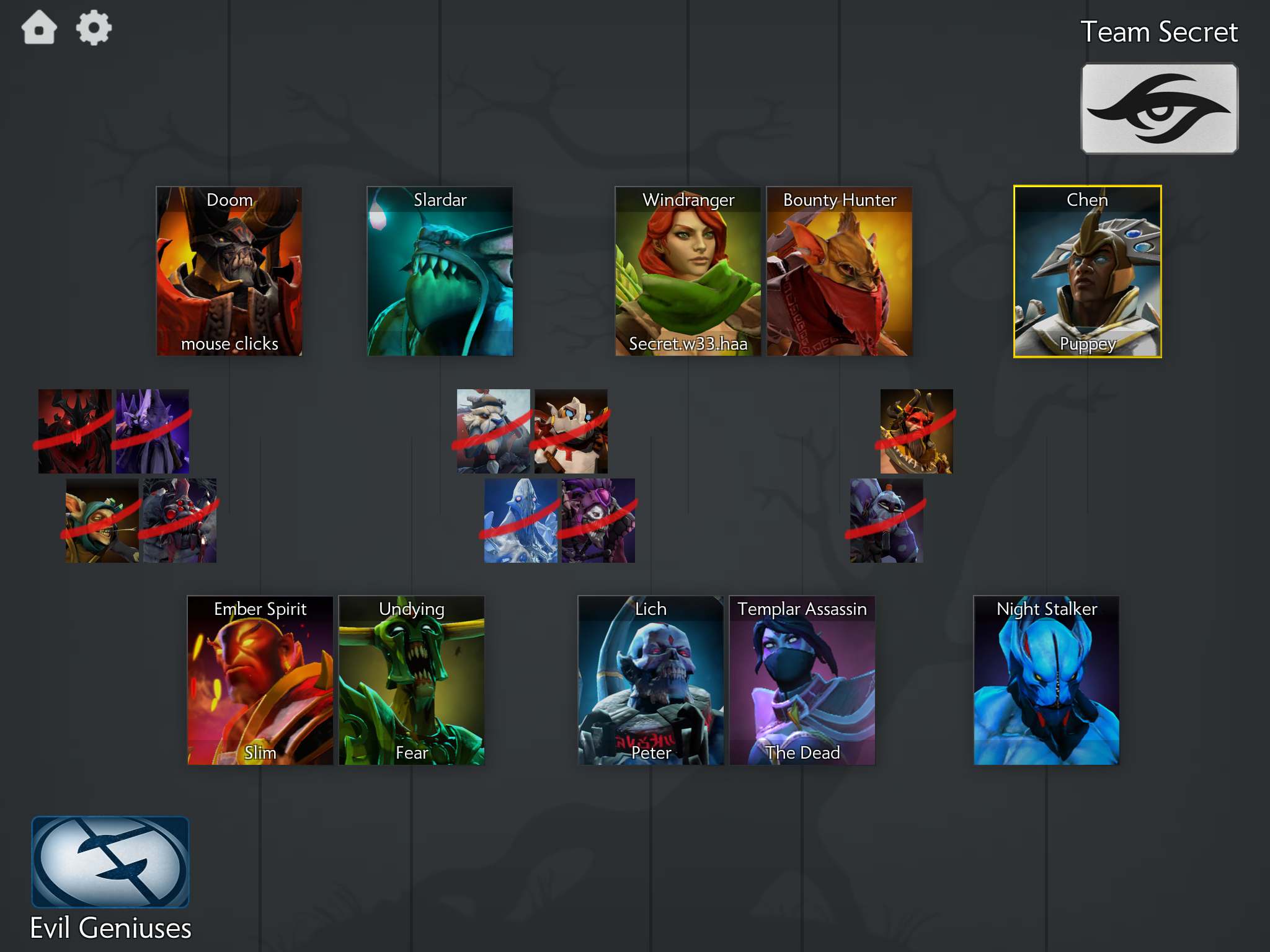 The aggressive trilane of Ember, Undying and Lich in combination with a Templar Assassin mid and a solo laning Night Stalker quickly led to a size-able early dominance for ppd’s squad. 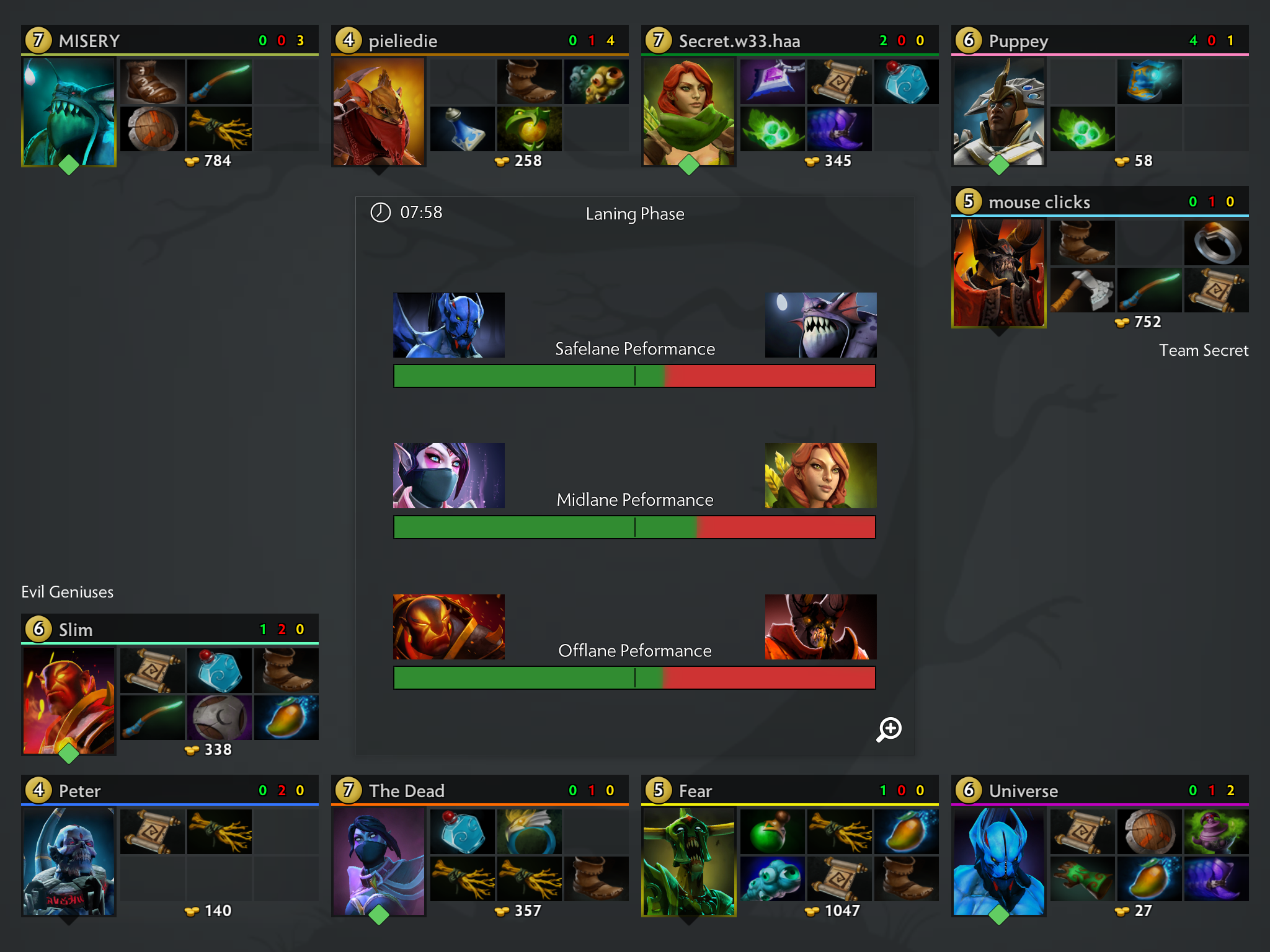 Yet, this was heavily counter-acted by the ganks enabled through pieliedie’s Bounty Hunter and Puppey’s execution on Chen:

In contrast, kills are going heavily in Team Secret’s favor. 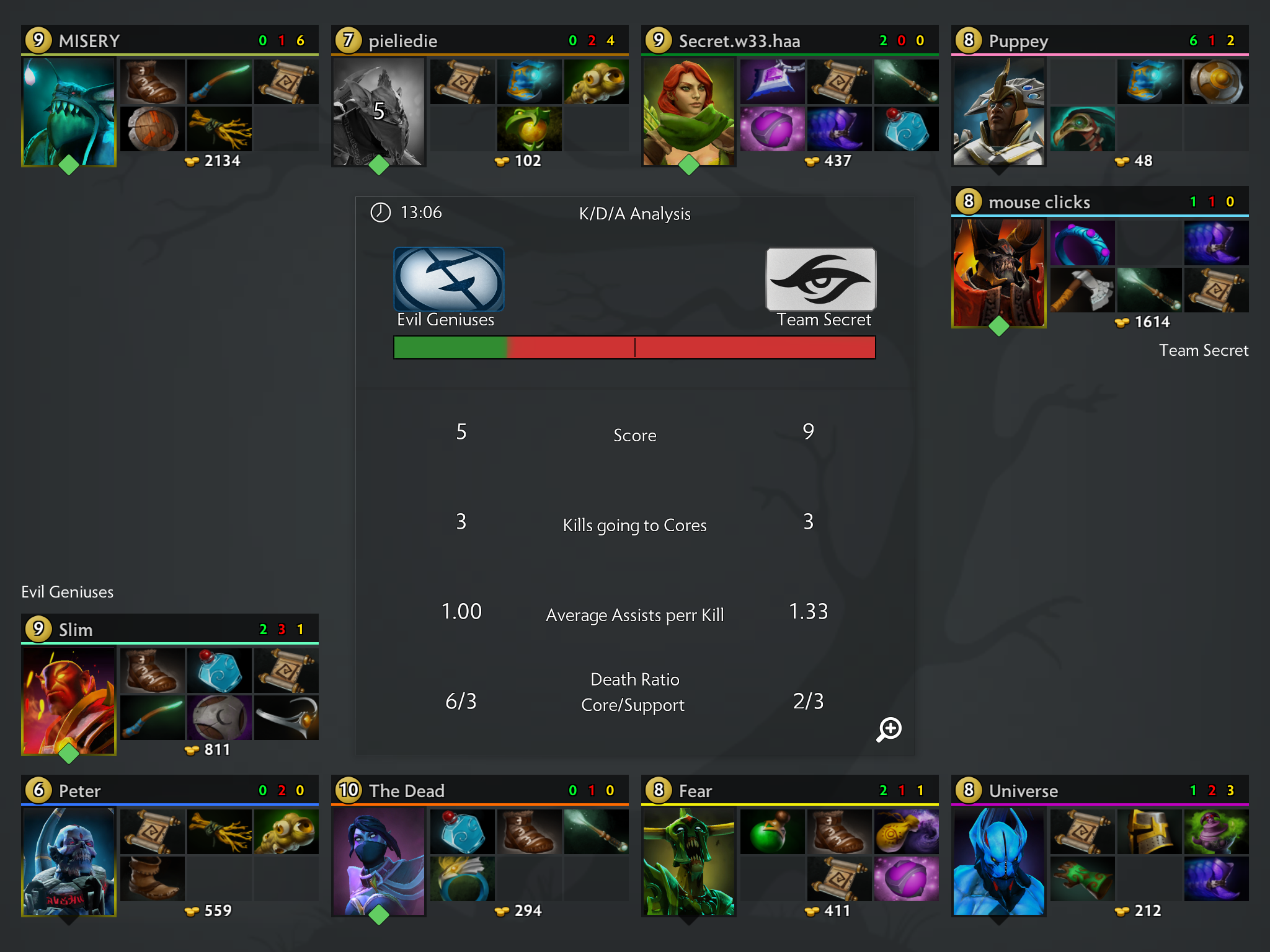 So, while EG managed to come out of the laning phase with a good advantage, Team Secret’s counter-ganks was what kept them in the game, enabled them to survive to the mid game and come out on top to win it after 41minutes.

Dota 2 is a registered trademark of Valve Corporation.

View Comments
There are currently no comments.